In 1943, a philosopher named Abraham Maslow published a paper titled “The Theory of Human Motivation,” in which he addresses the motivators behind human behavior. He divided these motivators into five stages, and placed them in order of significance on the pyramid.

Maslow states that humans must climb the pyramid, and cannot ascend to another level until the preceding levels’ needs are met. For example, a person would not partake in with love and friendship if they are only concerned with their basic needs: Food, water, and maintaining bodily functions. In our advanced society we place very little emphasis in securing our physiological needs, taking their accessibility for granted—if I am hungry, I simply swing by the store or a restaurant.

Furthermore, we sleep soundly under a blanket of protection as the police patrol our streets and the military protects our borders. Most Americans actively concern themselves with only the top three stages: Love, Esteem, and Self-Actualization. Our generous empathy derives from the fact that our society has their basic needs already met. Imagine what will happen to our society when the bottom two levels instantly falls out beneath us. Will we find ourselves spending an entire day simply trying to make it to tomorrow? 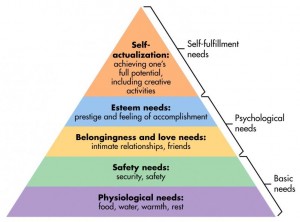 One thought on “The Human Need Pyramid”